Miles Matheson stood in stunned disbelief, booted feet spread shoulder-width apart, hands propped on his sword belt. Cautiously, he reached below his worn leather jacket for the long-knife strapped to his right thigh, ignoring for the moment the brass-knuckled grip of the sword at his left. He didn’t even bat an eye at the 50 caliber pistol at the stranger’s hip and the two katanas. Everybody carried knives and swords—just not usually strapped to their backs. If they had guns, they normally kept them covered and out of sight. He’d seen a lot of weird shit in the fifteen years since the lights went out—all over the word—but he had yet to see a grown man in a red and black, footed sleeper.

“Bas, who the hell is this guy, and why is he wearing a mask and a red onesie?”

Sebastian Monroe, former leader of the Monroe Republic of what used to be known as the northeastern United States, grinned wide and clapped the red-suited man on the shoulder. His steely blue eyes gazed with undisguised shrewdness into the rich brown of his old friend. They’d been through hell and back since the blackout. Monroe had built an empire and lost it all when the Patriots bombed Philadelphia and the Georgia Federation headquarters in Atlanta.

“This guy,” Sebastian began, a twinkle forming in his eyes, “is going to help us defeat those so-called Patriots.”

The man in the form-fitting red suit darted forward and grabbed Miles’ hand before he could pull his knife. “Glad to meetcha. The name’s Deadpool. I don’t know everything that’s going on, but I know enough, and I’m ready to Kick. Some. ASS.” He smacked Miles on the shoulder, knocking the befuddled man to the ground. “Sorry about that. Get up. We got some planning to do.”

Deadpool walked slowly ahead, head turning this way and that and nodding, taking in the rusted structures around them. “I really like what you’ve done with the place. The retro urban-industrial vibe you have going on is so chi-chi.” He spun around, kicking up dust from the trash-littered concrete floor. “Dude. Get up from the floor. It’s so unbecoming of a man of your stature. Mister General Monroe has told me so much about you.”

He dashed toward Miles, grabbed his shoulders, and hauled him up to his feet. While brushing the dirt from his clothes, Deadpool mumbled appreciatively, “A little on the thin side, but my ol’ buddy Bas forgot to mention what a fine posterior his boyhood friend had.”

“Get off me!” Miles jerked away from the handsy fellow and proceeded to brush his own clothes off, but quickly gave it up as completely pointless. “Keep your mits to yourself, pal.” He tugged his jacket back into place and rolled his shoulders. “Bas, please tell me this is some kinda joke. Where did you pick this guy in the clown suit up?”

“This is not a clown suit, as you so ineloquently put it.” Deadpool raised his head and reared back. He ran the tips of his fingers down his arm and then both hands flowed smoothly down over his chest and stomach. “I’ll have you know my outfit was made from the finest Corinthian leather, tanned by highly skilled masters of the trade, and stretched over the creamy thighs of virgins.”

Baffled, Miles just scowled at him.

“No joke, Miles.” Bas crossed his arms over his chest. “You know those bandits out past Willoughby, on the east side? Deadpool took ‘em all out. By himself. He was shot six times—”

“Er, seven times,” Bas amended. “And he kept slicing up bad guys like nothing happened.” He extended his hands toward Miles, palms up, in a pleading gesture. “With him on our side, we can take out that bullshit president and his minions. All of them.”

Miles’ eyes narrowed to slits as he stared down his nose at the sandy-haired Sebastian. “Are you out of your mind? We don’t know who the hell this Deadpool person is. Why would he trust us? Why … why should we trust him?”

“Well, hell-lo Miss Guns-n-Ammo!” The object of their discussion drawled in a sing-song voice. He clapped and then rubbed his gloved hands together. “I think I’m in love for the second or third time today!”

Miles twisted around and looked up to where Deadpool’s attention was focused. His niece, Charlie, was on an iron catwalk about two stories above them. The sawed-off pistol-grip shotgun wasn’t exactly aimed at the newcomer, but it was ready.

Before Miles could say or do anything, Deadpool skipped across the floor and bounded up the metal, skeletal stairs. He halted one level below the attractive young woman and dropped to one knee. “Allow me to grovel before your heavily armed and yet nubile beauty.” He brought his hand to his chest and bowed low over his knee. “I am enthralled by your lethal mien and the knives draped seductively on your hips. I vow to pledge my services, sexual or otherwise, to your worthy cause.”

Charlie merely raised one eyebrow as the corner of her lips lifted in a half smile. She pointed the gun at him. “Miles, who is this?”

Stirring from his shocked paralysis, Miles charged forward, drawing his sword. “Hey! That’s my dead brother’s daughter you’re propositioning! If you lay one hand on her I’ll—”

Deadpool leapt and grabbed one of the lower supports of the catwalk Charlie was standing on, and flipped himself up and over the safety rail, deftly snatching the shotgun from her hands, and landing a few feet away from her. After rapidly ejecting the shells, he tossed it away and it clattered across the grating. He held his hands up in front of him and briskly waggled them. “Not armed at the moment, sweetheart. Just like you. Glad you didn’t shoot. It would take me for-ever to fix my superhero suit.” He backed away and leaned arrogantly against the handrail. “I’m Wade Wilson, and you are …?”

Charlie reached behind her back and swung forward a crossbow, bolt in place and aimed dead center of Deadpool’s superhero suit.

“Impressive,” Deadpool breathed. “Woman after my own black heart. I’m definitely in love. Your name is …?”

“Charlie Matheson.” She nodded toward Miles two flights beneath them. “His dead brother’s daughter. I also happen to be his current girlfriend’s daughter.”

“Oh. Kinda kinky. I like.” Deadpool nodded. “Anyhow, let’s say you and me blow this pop stand and get to know each other better before we have some wild and animalistic, but extremely satisfying, sex. Or we could have the sex first and then talk. I’ll leave that up to you.”

Charlie couldn’t help laughing, but she kept the crossbow trained on the odd man. “How ‘bout we get to know each other better first. You start. Why did you hook up with Monroe? Why should we trust you? We barely trust him.”

“Well, it was those striking, sky blue eyes and his manly, yet boyish good looks …” He winked at Charlie. “Trouble in paradise, Sebastian?” Deadpool leaned over the rail to speak to Monroe. “You assured me every single one of your people were one hundred and ten percent behind you.”

Guiltily, Sebastian looked anywhere but at Deadpool. “Well, that might have been exaggerated a little.”

“A little?” Miles exclaimed, sheathing his sword. “Just who the hell are you and keep your hands off my niece!” His hands slapped his thighs as he paced back and forth, scuffing through the dirt and trash. “Why do you care what the Patriots are doing?”

Deadpool stiffened and turned to face the men below, resting his hands on the iron rail. “I’ll tell ya why I care what the Patriots are doing,” he said with a sneer. “They’re the ones that dropped those nuclear bombs on the City of Brotherly Love and Hotlanta. All so they could march into thriving, peaceful little villages, poison the town folk with designer viruses, and then swoop in with the vaccines to cure everyone. Well, cure those they deem worthy. It makes them seem like God’s gift to mankind. There’s nothing scarier than somebody who says, ‘we’re from the government and we’re here to help.’” He stalked away from Charlie and returned. “Then they take the ever-so-grateful peasants’ children to those boot camps and fuck them the hell up. They’re drugging and torturing them—turning them all into mindless slaves. Deadly assassin-slaves, but still slaves. If those kids kill somebody it should be because they want to! Not because they’ve been ordered to!” He slammed his hand down on the rail and it rang loudly, echoing throughout the building. His voice lowered. “I know a little something about being drugged and tortured by scum-sucking douchenozzles who want you to annihilate people for them, and it ain’t happening. Not on my watch.”

He stopped in front of Charlie and held out his hand in invitation.

Wide eyed, she stared up at him, but she had lowered the crossbow. “I-I can see that,” she stuttered. “Right, Miles?”

Miles and Sebastian were just gaping at them, mouths hanging open. They didn’t know what to think.

Charlie placed her hand in Deadpool’s and smiled. “Wade Wilson, I think I’d like to get to know you better. Maybe you can show me how you got that shotgun out of my hands so fast.”

His fingers wrapped warmly around hers. “Will it piss off your mom and your uncle?” he asked eagerly.

“All the more reason then.” He took her hand and placed it in the crook of his elbow and led her away, their boots clanging on the catwalk. “Don’t wait up, Miles! You know, Charlie. May I call you Charlie?” At her nod, he continued with a seductive lilt to his voice, “You know, Charlie, you would have been a fuck-hot centerfold for Shooting Illustrated. Maybe we could practice some poses together. I’m very photogenic.”

“Oh, yes. A long time ago in a galaxy far, far away …” his voice faded as they disappeared into the shadowy interior.

Down below, Miles shook his head at the retreating couple and turned to a bewildered Sebastian. “What the hell just happened?” 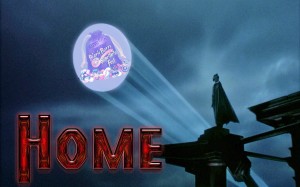