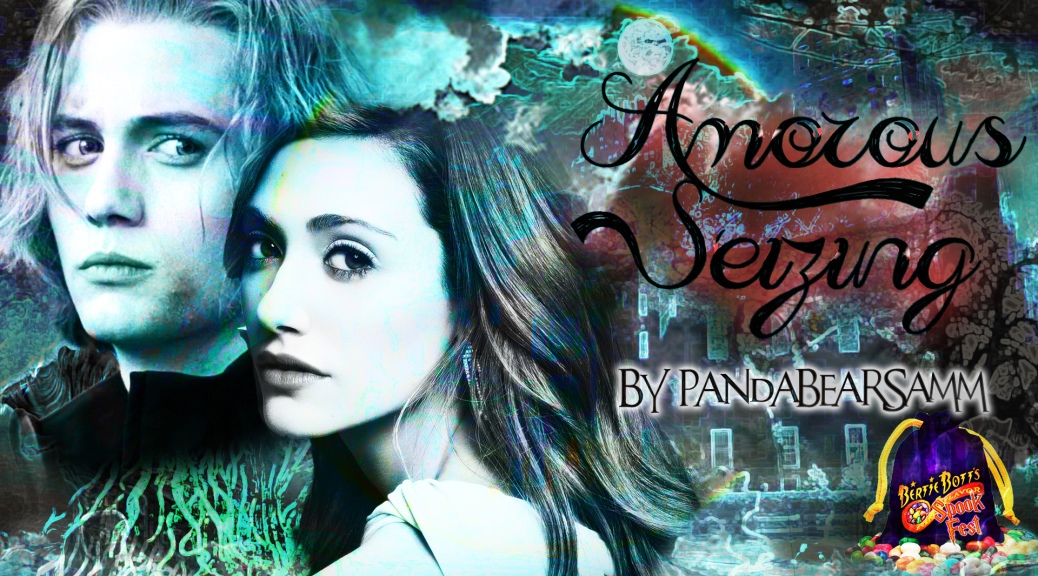 Prompt: One night, a woman, and a mental patient summon a vampire.

“Come on Bella! It will be sooo much fun!” Alice trills as she gracefully makes her way through the forest.

“Yes, so very fun! I love going out to the middle of nowhere to do some creepy rituals on Halloween night!” I call sarcastically while trying to avoid branches. I look up to see her just shaking her head.

“You don’t understand Bella,” She said, “we are summoning a vampire!”

“You can’t summon a vampire for god’s sake Alice!” I say while stumbling over a log.

“You can and we will. No matter what!” Alice said as she gave me a cold hard stare. Shivers ran up my back and my started head screaming to tell me to turn back now.

“Ok! Whatever.” I grumble pushing my feelings back. I silently followed the girl who suddenly became my friend only a month before.

Alice was peculiar and wasn’t afraid to show it. On her first day of school at Forks High she boldly walked up to me and said we were going to be best friends. It startled me at first, but then I quickly relented. Her bubbly personality made it hard to resist. Alice refused to talk to anyone else besides me and we became fast friends. So fast that I lost my other friend, Angela, because Alice proclaimed she was jealous of our friendship. When October rolled around Alice made plans for us to go to a nearby abandoned asylum near Seattle. So here we are, currently roaming the woods for the damn place.

“Alice! Are we almost there?” I whined. We have been walking for what seemed ages now!

“Almost!” She shouted gleefully, “Just have to go down this small hill here!”

I stiffened at the sight. The “small” hill was steep; “You know I can’t go down that without hurting myself!”

“Come on!” She huffed impatiently and grabbed my hand pulling me down the hill. Halfway through I slipped losing my footing and took us both down. On the way down I hit a jagged rock and felt it tear into my skin on my leg.

“Ow!” I said when we came to a stop clutching my leg. It was bleeding and had a cut from my knee to the middle of my thigh.

Alice got up and patted the dirt off. She eyed my leg for a moment, “Good, now we don’t have to use the knife to cut ourselves for blood.”

“Wait, what?!” I exclaimed wincing as I slowly got up, pain shooting up my leg.

“For the ritual silly.” She rolled her eyes at me, “Look! There it is!”

I took in the building in front of me. The fading sign read ‘Shadyside Asylum for the Insane,” and the windows and doors were boarded up. Looking at it I felt like it had something dark and evil about it. I heard a crack and saw that Alice broke off a rotten piece of wood over the door. It was big enough to crawl through one at a time.

“I don’t know Alice. I’m getting a weird feeling about this.” I said uncomfortably.

“You’re fine Bella!” She snapped. I flinched at her sudden tone, “Stop being a wuss and just come on!”

I looked around before sighing. I didn’t want to make her even more mad at me so I followed her into the building. Crawling through the space I noticed that I couldn’t see around.

“Alice? I can’t see!” I yelled my voiced echoing in the abandoned building. Alice never answered as I got up and started shuffling around until my eyes adjusted a little to the darkness. I felt my hairs on my neck stand up. I could feel someone’s presence behind me. I balled my fists and prepared myself to run. I slowly turned to face whoever it was.

No one was there. I breathed a sigh of relief before I felt a hand on my shoulder. I screamed and turned around ready to punch them.

“Bella! It’s me!” Alice yelled ducking to avoid my punch dropping her flashlight, “Geez it isn’t that scary in here.”

“You left me in the dark! Of course I’m freaked out!” I bitched at her, throwing my hands in the air. My heart was pounding a mile a minute as I breathed slowly to calm myself. Alice shook her head as she picked up her flashlight.

“I was making the pentagram for the ritual! Ok, whatever let’s go.” She started to walk off until another area. I followed her wearily, wondering if I was started to imagine that someone else was in the room.

We entered what looked like an old break room with papers scattered everywhere. I glanced at the newspaper on the paper with the headline ‘Criminally insane patient escapes Asylum,” dated only ten years ago.

“Alice? How long has this place been abandoned?” I questioned her as she placed candles on the points of the star and lit them.

“A year after the patient escaped.” She said shrugging her shoulders, “Now come here we are ready.”

I sat down across from her as she gathered a goblet, a knife, and some bottles filled with liquids. She placed the goblet in the middle and then handed me the knife.

“Smear your blood on this.”

“Give me your hands,” She ordered. I quickly grabbed her hands before she started chanting.

“Venite ad me nocte monstrum. Exsurge a tenebrae meae sempiternum!” Alice’s eyes glossed over and turned white as the candles flames climbed higher. I shrieked and tried to let go of her hands, but her grip tightened. The building started to shake and the lights flickered. I felt my heart beating wildly again. What’s going on?

As soon as it started it ended, with a loud whoosh a gust of air put the fire out on the candles. Alice gasped and let go of my hands. She grabbed her hands and started moaning as her nose and eyes started to bleed.

“Alice?!” I scrambled over her. As I was about to touch her she slapped my hand away.

“I’m fine!” She snapped suddenly. I froze, “Just took a lot of energy that’s all.”

“Alice, you are not fine!” I persisted, “You are bleeding!”

“And what a sweet smell it is, but not as intoxicating as yours Bella.” I heard a low murmur in my ear. I shrieked again grabbing the nearby knife and turned around.

I was facing a pale man with honey blonde locks and a beautiful smirk painting his lips. He was a gorgeous specimen of a man, even with his tattered clothes with what looked like blood smears on his chest. What was most startling of all was his blood red eyes.

He chuckled lowly making shivers dance up my spine, but not in a bad way.

“A knife will not harm me sweetheart.” He drawled slightly with a southern twang. I blushed instantly, but kept the knife up.

“Jasper?!” Alice questioned quietly behind me. The man’s eyes snapped to attention to my friend.

“Well, look who it is.” He smirked, “Enjoying your freedom Mary?”

“Mary? Her name is Alice though and how do you know her?” I asked confused by the sudden events.

I glanced at Alice, but she wouldn’t meet my eyes, “Tell me what?”

“Miss Mary here escaped this asylum ten years ago. She was one of the most insane patients that the doctors have ever seen. She was bipolar and claimed she had visions of vampires.”

“What? Is this true Alice?!” She nodded meekly at me saying nothing. I looked at her with shock, “That would mean you were the escaped patient! That would make you in your thirties! Why?”

“I was led to you Bella! I saw you were going to be my best friend and the reason why I would draw Jasper out of hiding! I NEEDED YOU!” She howled grabbing her head and jerking around.

“I don’t get it, why would you need me to get in contact with this man?” I interrogated.

“Bella, you must realize now that I am no ordinary man,” Jasper smiled revealing sharp canines, “but a vampire.”

“They are not real.” I said quietly. Before I could say anything else he moved in a blur behind me.

I turned around quickly to see him holding Alice up holding her chin up revealing her neck to him.

“Why Bella? She lied and used you! She never cared for you!” He roared making me take a step back he noticed this and his eyes softened, “I can feel her emotions. She betrayed you Bella.”

“I don’t understand.” I cried.

“Bella! This is okay! I saw this!” Alice laughed gleefully, even though she was in the arms of a vampire, “He will make me immortal like him!”

“What about me?” I shouted, “What happens to me then?”

“I-I’m going to die? You are going to let me DIE?” I screamed, the building shook again. Jasper looked around smiling at my actions.

“You are much stronger Bella,” Jasper smiled brightly making my heart flutter, “Mary’s visions were greedy. She only saw what she wanted and never the truth.”

“What? NO!” Alice screamed shaking wildly in Jasper’s grip, “We were supposed to be MINE!”

Jasper sighed, “No Alice, it was Bella that was supposed to be my mate not you!”

Jasper lifted her chin higher and plunged his teeth within her neck. I watched, slightly fascinated as Jasper swallowed her blood. There was no doubt that he was a vampire now. Jasper slowly lifted his head to reveal blood on his lips. He licked the remaining blood off, and then quickly snapped Alice’s head. She dropped to the floor, dead.

I kept the scream in my throat not allowing it to escape. I looked at Jasper slowly advancing on me. Before he could reach out and touch me an invisible wall blocked him.

He scowled, “Bella, I won’t hurt you. Lower your shield!”

‘Shield?’ I thought, ‘I’m doing this? This is my time to escape then.’

I shook my head and turned, running away. Jasper growled loudly still stuck behind my shield.

I quickly made it through the corridor trying not to trip. This was not the time to be clumsy. I saw a faint light from the doorway from the crack we entered when we came.

‘Yes!’ my mind screamed, almost closer as I got down to crawl through showing me the light of the moonlight. Halfway through the crack though I felt hands go around my ankle and pull me back into the darkness.

I was turned around roughly to my back to face Jasper who was standing over me. He face looked angry and fierce making me gulp nervously. In a sudden blur I was slammed into the wall, Jasper’s nose trailing my neck.

“You smell exquisite Bella,” He said inhaling deeply, “Never run like that again. I will chase you down to the ends of the Earth mate.”

I nodded, submitting to the fact that I would never get away. Jasper then bit down unto my neck, injecting me with burning flames. I fell into the burning blaze, somehow feeling complete and safe as my humanity burned away.